For my senior “capstone” project I wanted to create a project on a subject that I care about and spread it across a variety of media. Just at this time my wife volunteered at the Latina Health Fair, a free health fair that serves the uninsured Latino community. They currently don’t have a designer or promotional campaign so I decided to create promotional materials that could be used for next year’s fair.

I started the process by working on a logo. The main challenge with a logo for the Latina Health Fair is that it is a bilingual event so all of the materials had to clearly communicate in Spanish and English. Creating a compelling mark with both the English name and its much longer Spanish counterpart provided the main challenge in the development of the identity. Below are my sketches for the Latina Health Fair 2010 logo.

It was obvious from the beginning that the solution would rely heavily on clear typography. I looked on integrating illustrated elements, common health care symbols, latin american motifs, and a variety of type lockups. Now I had some initial ideas to work from so I moved onto the computer to develop them more.

It was clear after rendering the different logo concepts that the sans serif display type offered the most opportunity for a dynamic type lockup. I experimented with different ways of displaying the English and Spanish names together before settling on the L shaped english name with the Spanish name nestled inside the negative space created by it.

From there it was time to apply the logo to the necessary promotional materials. I began by sketching out different concepts for a poster and accompanying brochure. The materials need to catch attention, as well as encourage trust from the uninsured audience it is targeting.

From these poster ideas I decided that simple photography of a Latina subject and strong typography would clearly communicate the intended message. I began looking for an appropriate model and moved onto the computer to begin producing the promotional materials.

I came up with concepts of a close-up versus wider shot. I decided on the wider shot because it is less confrontational and encourages more trust in the viewer. The close-up ended up on the cover of the materials folder.

From there I moved on to the website layout. In the end it was a choice between a fixed width layout and a more fluid layout. I decided on the fixed width because it was narrow enough to fit on older CRT monitors whereas even at it’s narrowest the fluid layout could become crowded. 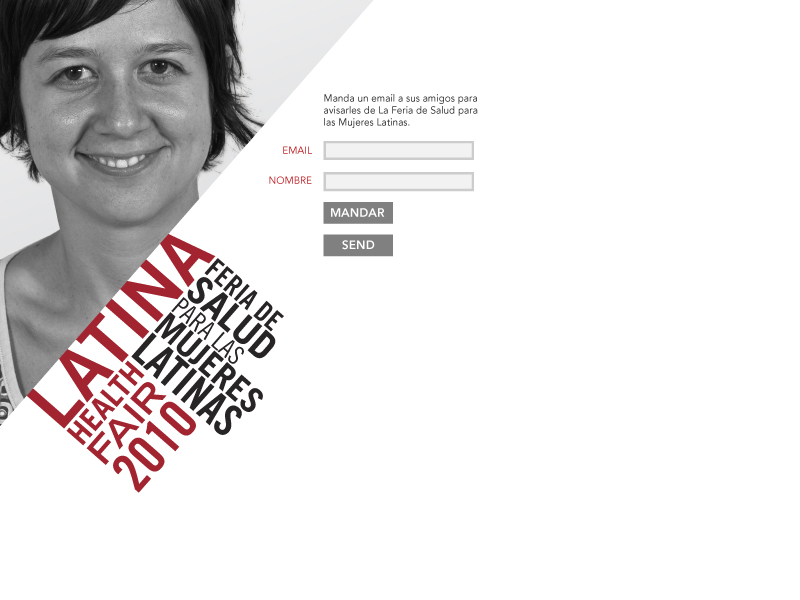 The project still has room for expansion. The website might benefit from video in order to communicate with viewers who might have trouble reading, which is a reality in under-served minority populations. The program could also be more successful if it includedshort TV promos in order to reach those without internet access. This would alsohelp those who may not come in contact with posters or brochures available at community centers, churches, hospitals or UW campus. The University of Washington School of Medicine is a major contributor to the fair.